I’ve tried to stay away from the public debates on the extremely sensitive issue of abortion law reform because I firmly believe that people should have the opportunity to be heard without politicians always getting in the way.

Another reason is that I made my position on the issue clear during the election, on the doorstep when asked, at the requisition meeting, on Manx Radio and in my responses to the questionnaire published in the newspaper. I am completely in favour of reforming our current legislation and support my fellow Ramsey MHK Dr Allinson in his attempt to get a measured and appropriate Bill through Tynwald.

It turns out however that a lot of people weren’t paying attention.

I’ve made a commitment to myself that I will try and respond to every piece of correspondence that I receive, even the ones that lead to uncomfortable conversations and so now I find myself responding to a host of generic postcards and anti-reform letters, many not even from my constituents.

I’m not sure what impact people hope to have writing to someone who has already publicly said to his constituents that he will support a particular course of action – especially when said people are in another constituency – but then it’s up to them what they spend their time and money doing.

In any event Dr Allinson was very public about his intentions during the election and was returned with an overwhelming number of votes, so I consider he really does have a public mandate from our constituents to pursue his chosen course.

I’m very supportive of people sharing their views with me and find that engaging with people who had different opinions is the best way of really understanding an issue and developing policy around it. But what really does frustrate me are messages like the following: 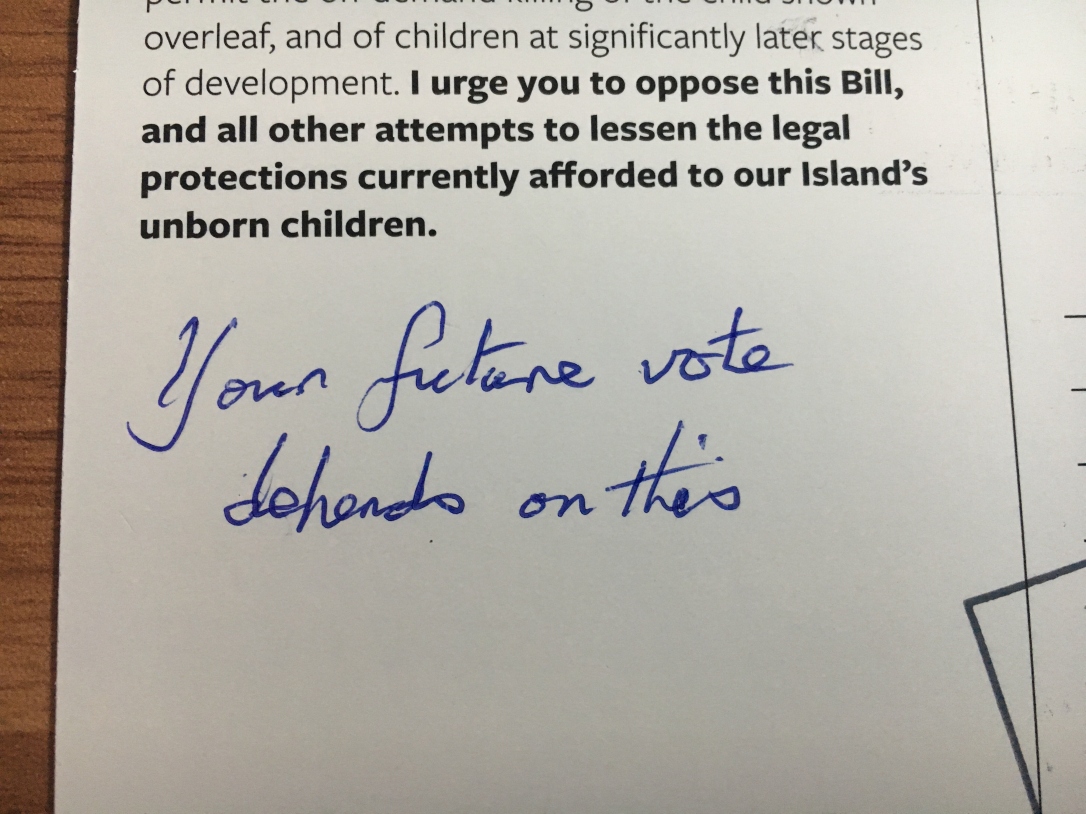 I only made one promise as part of my election campaign – that I would stand by my principles and make decisions that are in the best interests of the Island, not just easy decisions.

I certainly will never make a decision based on what’s most likely to get me re-elected.

If I make decisions or vote for things you disagree with then of course you can vote me out at the next election, just don’t think it’s going to make me go against my principles.

(Also, just a bit of advice to the authors of these two notes, if you are going to threaten to withhold your vote it helps to be on the voters register in the first place…)

**I’ve also received a lot of letters and e-mails supporting the proposed reforms, but so far no one in the pro-reform lobby has resorted to tactics such as those above